Twin object is .net representation of a complex PLC data type (STRUCT, UNION, FB, GVL, PRG). Each of these data structures is represented by a separate class of which name is the same as the name of the respective structure.

Each twin object implements two types of interfaces IOnline interface which exposes members with direct communication ability with the PLC system and IShadow interface with allows for an offline manipulation of object's data.

There is a separate class Plainer that is produced during the trans-piling process which is light (POCO like) representation of the same data structure, that can be is used in scenarios involving serialization.

Each of the mentioned is constructed and represented inside Inxton as several partial Classes plus corresponding interfaces. Please find more details in the sections below.

More about TwinCAT 3 data types can be found here.

NOTE: FUNCTION (FUN) are not compiled as the data of function block are temporary.

The compiler supports Members of POU declared in sections as well:

Read more about the nature of TwinCAT 3 variable types and special variables is available here.

During the process of compilation, several partial classes and interfaces are being created. Each of the objects serves a specific purpose and its members are with a different relationship to PLC object. Having a Function block named FbPiston created at PLC side. The result of the compiler's effort is Onliner and Plain classes plus Online and Shadow interfaces. Please carefully analyze the sample below. 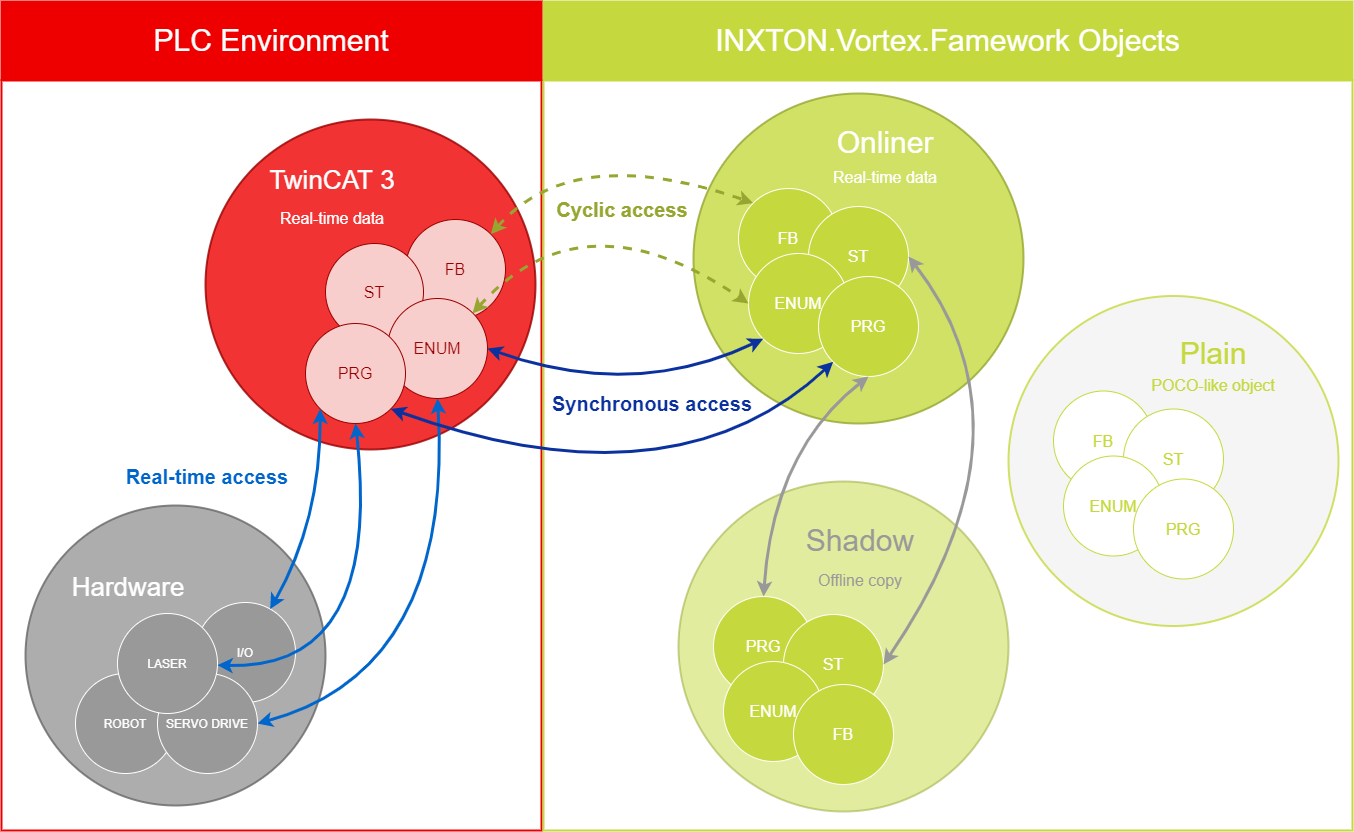 Onliner is having a name identical to POU's name.

IOnline will prefix the POU's name with the 'I'.

Vortex.Compiler trans-piles also light POCO like objects that represent each PLC block. These objects are typically used in serialization scenarios. The Plain object is POU's name prefixed with 'Plain'.

Reads all variables (Primitive Twins) contained in this structure (TwinObject) and its children. The variable read from the controller is stored in LastValue property of Primitive Twin(s).

Reads all variables (Primitive Twins) contained in this structure (TwinObject) and its children. The variable read from the controller is stored in LastValue property of Primitive Twin(s).

In analogous way you can swap data between 'Shadow' holder using 'CopyPlainToShadow()' and 'CopyShadowToPlain()' on plainer type.